If you find yourself traveling through France save a few hours for the charming town of  Amiens. Amiens is in the north of France about an hour and a half train ride from Paris that is often overlooked by well, everyone.

The slew of pubs and your friendly neighborhood Zara is nothing to write home about but, this town whose nickname is “Little Venice of the north” has a few gems you’ll want to add to your French expedition.

I hopped on the garden boat tour not entirely sure what to expect but imagine my surprise when we pushed off and I was immediately transported into a midsummers nights dream. As shown above, you are surrounded by lush gardens as a tour guide describes the history of the Floating Gardens of Amiens, widely known as Les Hortillonnages d’Amiens.

The garden is believed to have been built in the Middle Ages and was the towns main source of agriculture when the garden was 10000 hectares but sadly only 300 remain.

There are a handful of small homes inside the garden that look like something out of Hansel and Gretel. They are also available to rent if you want to live in a fairytale for a weekend but also be watched by strange people on boats all day every day. I mean do you.

There was also a house that I found most interesting nestled in the realm of tres bizarre, that I still have no words for. Please discuss…

The Norte Dame Cathedral built in the 13th century is one of the largest in the world and considered to be the greatest representation of classic gothic architecture. The cathedral is the town monument of Amiens and can be seen from just about anywhere. Standing next to the cathedral made me feel smaller than a macaron, and the ornate detail is honestly insane and 1 million percent worth your time.

This cathedral is so unbelievably cool that they put on a light show during summer nights. Raise your hand if your church does that… I didn’t think so.

Jules Verne is apart of the Amiens history because he lived in Amiens from 1857 until his death in 1905. During his years in Amiens he wrote Twenty Thousand Leagues Under the Sea, Around the World in Eighty Days and Journey to the Center of the Earth.

Verne’s influence is alive and well in Amiens and can be seen in the town’s college, Universite de Picardie Jules Verne, the Cirque Jules Verne theater and his home, Maison de Jules Verne which is now a museum. 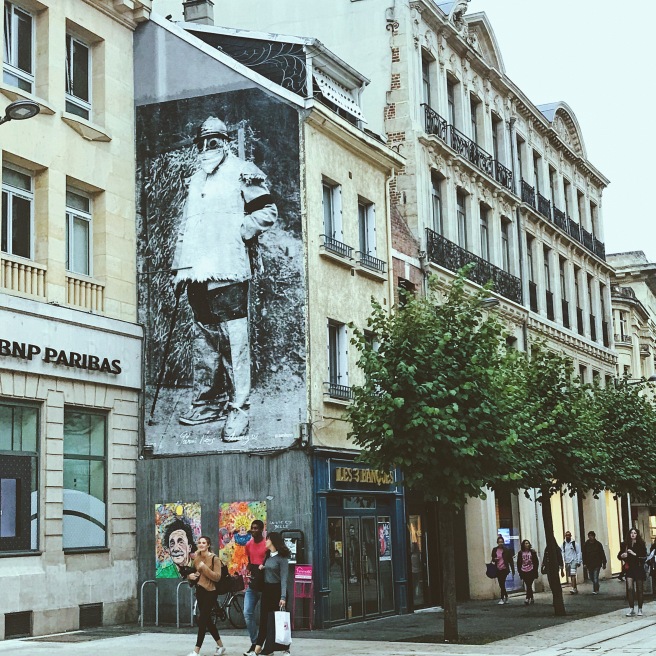 The year 2018 is dedicated to remembering the battle of Amiens in 1918 which was apart of the Hundred Days Offensive, that led to the end of the World War I. Sprinkled throughout the city you can find photos of citizens and veterans during the war on charming old buildings.

Besides these photographs, you can also find street murals of Queen Elizabeth and Albert Einstein by pop collage artist Romain Dorez. The mix of both old and new is the key ingredient in Amiens charm cocktail.

Eat in the Saint-Leu Quarter that hugs the river Sommes. Take a stroll along the canals and be sure to try the La Ficelle Picardie which is what Amiens is known for! It is served just about everywhere. Let me tell you now that if dairy is unkind to you, the ficelle is not for you. To is an oven-baked crepe filled with ham, mushrooms doused with cream and cheese. Sure I was plagued with dairy regret but for a moment in time, it was bliss.

What do you think of Amiens? I’d love to know! 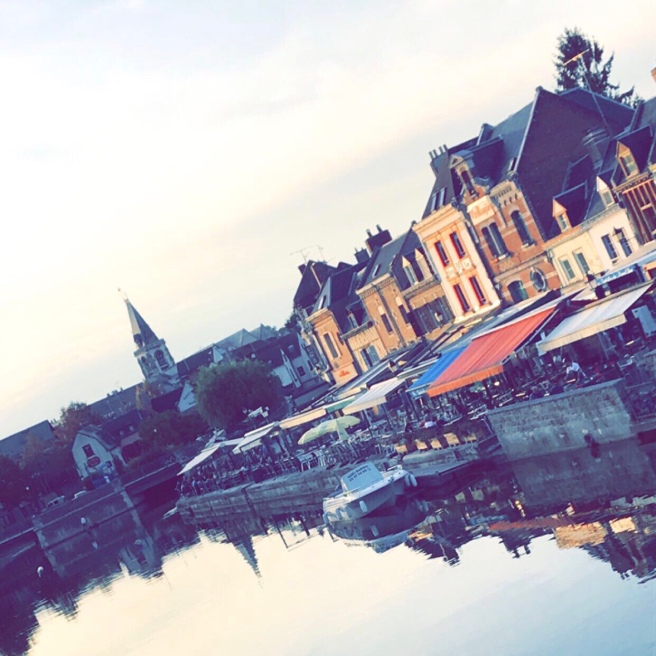 View all posts by

14 thoughts on “Traveling France – 5 Things to Experience in Amiens”

Greetings! I am a 20’s something California girl living in Paris, learning french, discovering the city and eating my weight in macarons. Join me as I (sometimes) successfully navigate Europe and share what I’ve learned along the way.

🎰 VEGAS 🎰
Missing Portugal more than ever every time I look at the weather. Catch me at work looking salty & daydreaming about white sangria and turquoise water until the city decides to heat up😩. Thank you to my trusty companion @nora_cramer for catching me in my thirst element. #Travel #Potugal #ProudtobeFTB #femaletravelbloggers