Island hopping in Greece should be on every traveler’s bucket list. But choosing which islands to include in your itinerary is no easy feat. Greece is home to about 6,000 islands in the Aegean and the Ionian Sea and Rhodes is the largest giving visitors much to explore and explore I did.

I left one day in my itinerary for a Rhodes adventure and it did not disappoint. Beach lovers, history buffs, and partygoers prepare your passports because Rhodes is not an island to miss.

I arrived at the Rhodes airport and took the city bus to the old town which was an hour-long ride along the coast. The bus was filled with airport travelers, locals and damp surfers with their boards in tow. I knew just about zero words in Greek which were quite a shame but like many places in Europe, the locals were VERY bilingual. Whatever language you speak, there is someone willing to help. (But obviously, the level-headed decision is to have a few phrases ready to communicate in the countries native languages, be better than me.) Language barriers aside, things to note are that if you are walking through the old town to get to your accommodations, do not bring a rolling bag. The cobblestone did a colossal number on my wheels. 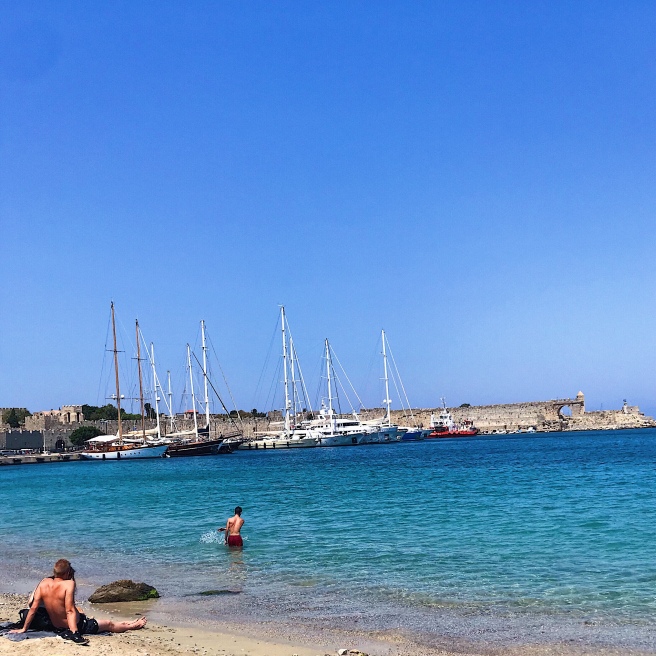 Walk the perimeter of the island and soak up the picturesque beach and stumble across the occasional ruin. MORE! It is not unusual to see people walking around the city in just a bathing suit, ready to abort mission and jump in the sea. wander along the sea along the strip and see the Fort of Saint Nicholas and its 3 windmills.

Continue along the strip and you can see a mix of modest sailboats and luxurious yachts docked with their owners sipping cocktails in the summer sun. Greece also has a large population of stray kittens which you can find near the water being canoodled and fed by tourists.

The market was quite standard but also unavoidable once you enter the old town. Be prepared for the shopkeepers to get your attention and also make you laugh. The pricing is in euros and is not necessarily a steal of a deal but that didn’t stop me from adding a pair of Birkenstocks to my already overweight bag.

The entire city is decked out with different variations of the evil eye talisman! There are bracelets, wall ornaments and pillows galore to ward off the evil eye curse. The evil eye is an ancient symbol, people with light colored eyes were fairly rare in this region. It was believed that those with light eyes, particularly blue, could bestow a curse with a single glare. Maybe they’re on to something?

Ruins are scattered throughout the island and are impossible to miss. On the eastern edge of Rhodes, the remains of the Church of the Virgin of the Burgh is nestled right next to the marketplace.  It is one of the oldest remaining buildings from the era of the Knights of Hospitaller during medieval times. The city is enclosed by medieval walls so you are physically surrounded by ruins and rich history. There are also several castles on the island like the Palace of the Grand Master Knights and the Kritinia Castle, which are definitely worth a visit if you fancy a more regal history lesson. 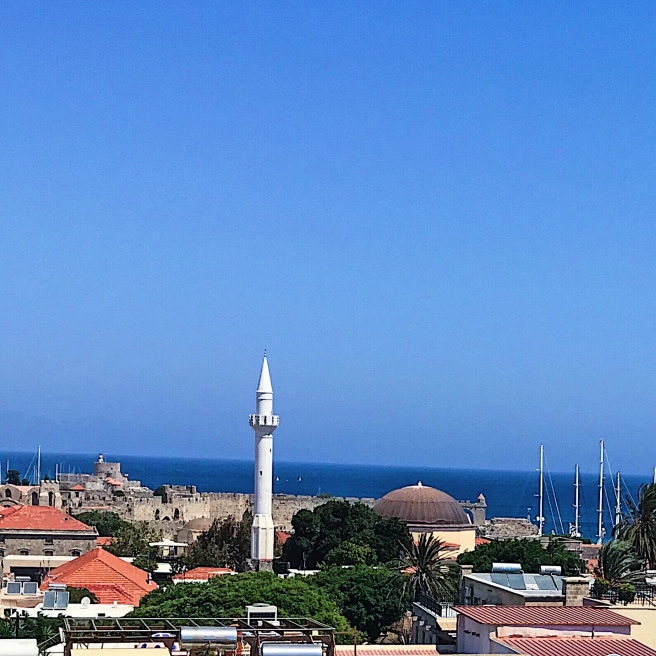 4. Get a Birdseye View

Bypass the crowds and stop by the Minos Pension and roof garden lounge for an authentic feel of the town. It is just beyond the hustle and bustle of the tourist hub and amongst the homes of the Rhodes residents. It is a bed and breakfast with a rooftop bar overlooking the entire island. It is a phenomenal photo opportunity and a fantastic watering hole.

The people of Rhodes were amongst the friendliest people I have ever encountered so n doubt wherever you choose to eat and or drink will be worthwhile. But I must recommend Romios restaurant for dinner for the nom-able food and dreamlike garden seating area! Particularly the black ink tzatziki sauce changed my life, so if you get the opportunity please, TREAT. YO SELF.

I ended the night at the Beer Garden Mythos which is nestled in a small square in the old town surrounded by bars, music and good vibes. I am not particularly into nightclubs so this was the perfect mix for me. You have the option to dance or sway in place and people watch. Anna, the manager was full of drink recommendations and great conversation. The staff drinks with you and goes above and beyond to make sure you are having a great time. I enjoyed myself so much that the following day was quite the struggle but  I could not recommend this place more!

Anything and everything you choose to see and do in Rhodes will be a memorable adventure. But I do hope that you’ll keep these recommendations in mind when planning for your Greecian voyage. I would love to hear where and what you want to do in Greece. Let me know below!

View all posts by

Greetings! I am a 20’s something California girl living in Paris, learning french, discovering the city and eating my weight in macarons. Join me as I (sometimes) successfully navigate Europe and share what I’ve learned along the way.

🎰 VEGAS 🎰
Missing Portugal more than ever every time I look at the weather. Catch me at work looking salty & daydreaming about white sangria and turquoise water until the city decides to heat up😩. Thank you to my trusty companion @nora_cramer for catching me in my thirst element. #Travel #Potugal #ProudtobeFTB #femaletravelbloggers